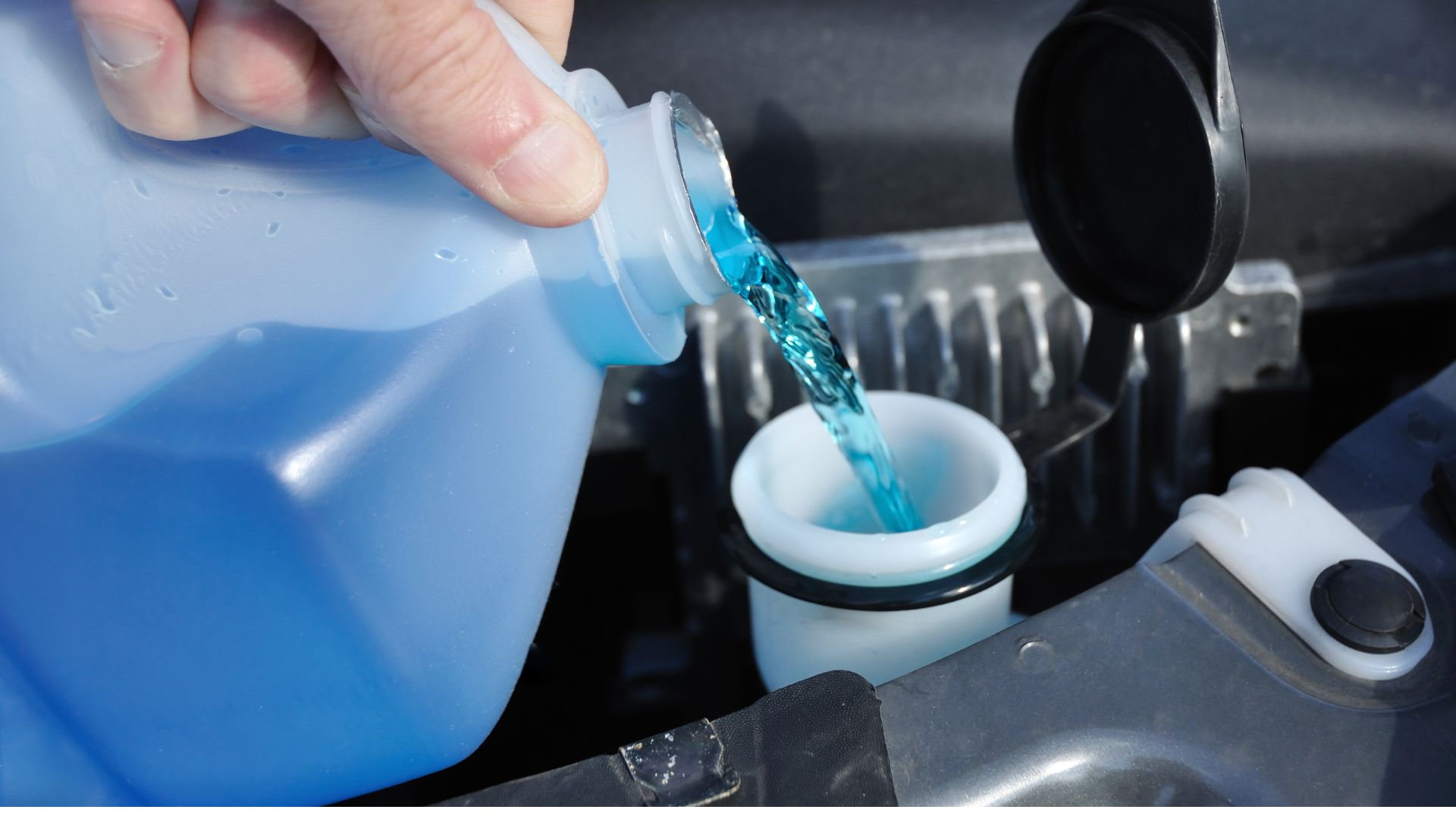 You can’t rely on the fluid’s anti-freezing capabilities. The heat from the engine will evaporate the methanol because it has a low boiling point.

It should be noted that methanol is flammable. It can ignite when exposed to a heat source. Admittedly, the typical windshield washer mixture is unlikely to catch fire. The alcohol content is too low. But some people make windshield fluid at home. If you get the quantities wrong, the resulting solution may pose a threat to your health.

You can add windshield fluid to the coolant during an emergency if you don’t have any other options. For instance, if you’re stranded on the side of the road. However, mixing the two products is not a good idea.

Using antifreeze in the place of windshield fluid is just as problematic because it creates complications such as:

According to Car Chex, antifreeze has components that damage the paint. Keep in mind that windshield wiper fluid can splash the top and sides of your car when you deploy it. Replacing the fluid with antifreeze will ruin the vehicle’s appearance.

People use antifreeze on the windshield to remove ice during cold weather. However, you cannot trust the substance to clean your windshield. It won’t clean off as effectively. Don’t be surprised if the antifreeze leaves an oily coating behind.

Antifreeze is dangerous to animals. Unfortunately, they will consume it because the substance is sweet.

Are Windshield Wiper Fluid And Antifreeze The Same?

1). Windshield washers are cleaning agents that combine various types of alcohol (such as methanol).

2). The product improves visibility. Technically, you can use any fluid you have on hand, even water. But windshield wiper fluid is superior to most cleaning agents. According to Cars.com, the methylated spirits will remove stubborn stains and grime without leaving any streaks.

3). You can also trust the fluid to melt ice during cold seasons. The methylated spirits will prevent the washer from freezing.

4). Windshield wiper fluid is dangerous to humans, animals, and the environment. Ethylene glycol, which also appears in antifreeze, plays a significant role in the work that wiper fluid does. And unfortunately, it is toxic, which is why some vehicle owners use non-toxic ingredients to make their own windshield washers.

6). You can find windshield fluid in various types. The standard option doesn’t offer antifreeze properties, even though it will keep your windshield clean and free of streaks. The bug remover type removes the muck that forms when bugs collide with your windshield.

Then there’s water-beading fluid, which turns the rain into beads that roll off. However, it is more likely to cause streaking.

1). Antifreeze prevents overheating and freezing in the summer and winter. It flows throughout the engine to maintain the correct temperature regardless of changes in the weather outside the car.

2). Even though water is a poor substitute for antifreeze, this product combines water with ethylene glycol to keep the engine at optimal temperatures, especially when conditions outside deteriorate drastically.

3). Many vehicles use basic antifreeze. But some manufacturers make special antifreeze for their cars. Using a coolant that differs from the recommended antifreeze in such situations could lead to a disaster.

However, even though some manufacturers use different dyes and additives to alter and enhance their antifreeze, all antifreeze types use ethylene glycol as a base chemical.

4). Antifreeze is a bright green or yellow fluid. You must top up the antifreeze whenever it falls below the recommended level. Don’t check the antifreeze of a car that was recently running without giving the engine a moment to cool. Otherwise, the hot coolant may spray out and burn you.

What To Do If You Put Windshield Washer Fluid In The Coolant?

1). You don’t want to start the car because doing so may clog the cooling lines. Washer fluid has soap that will expand rapidly because of the heat. The best response is to suck the washer fluid out with an effective tool such as a turkey baster.

2). Once the washer fluid is out, pour water into the empty reservoir and suck it out. At this point, it is safe to refill the reservoir with antifreeze.

3. You must flush the system if you started the car. This means taking the vehicle to a mechanic who can drain the reservoir. This process is relatively straightforward if the mechanic can remove the coolant reservoir.

4). Some garages have a suction tool that allows the technician to remove the coolant and washer fluid without taking the car apart.

It should be reiterated that windshield washer fluid won’t do permanent harm to your vehicle if you flush it out. The biggest problem is the temperature. You can’t trust a windshield washer to prevent freezing or overheating. But once you replace it with proper antifreeze, your car will operate as expected.

The same is true for people that accidentally use antifreeze in a wiper reservoir. The substance is only dangerous because it may cloud the windshield. Fortunately, you can solve this problem by draining the wiper reservoir, rinsing it, and adding a reliable windshield washer.