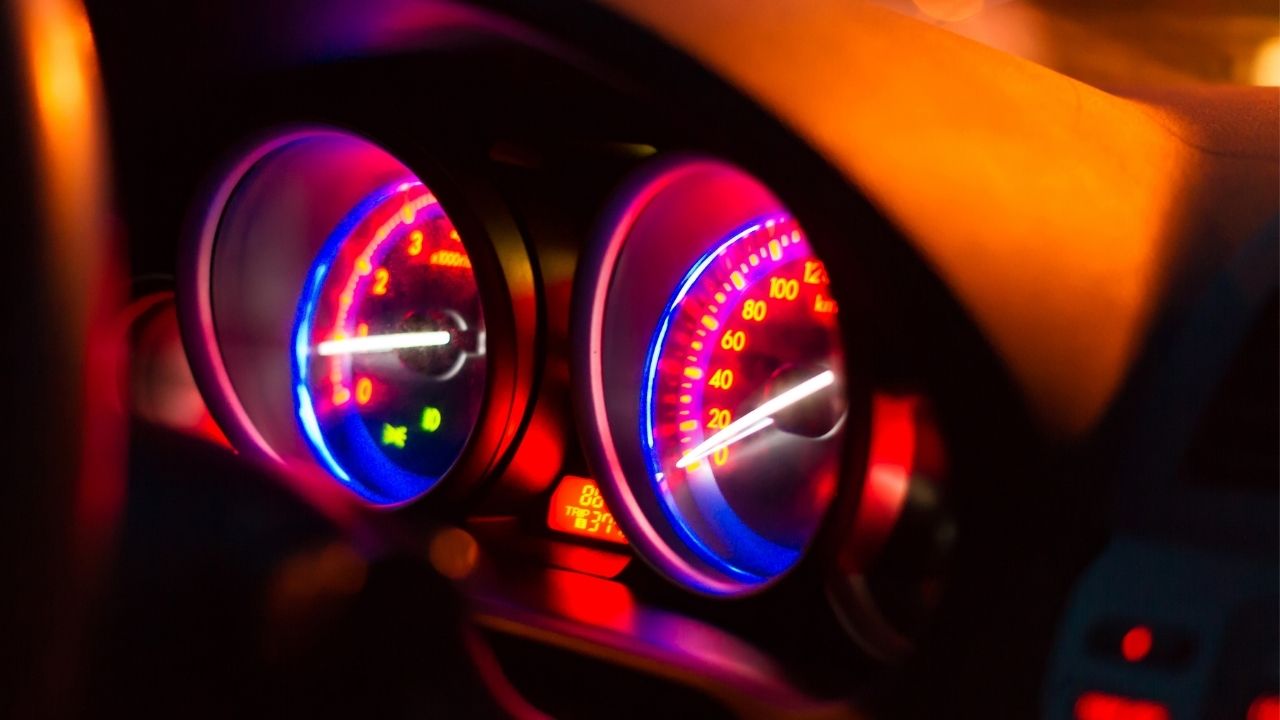 Most people think that they can customize their cars according to their requirements. That is why; they do not just look for exterior accessories but also interior ones.

If the interior LED car lights Flash or strobe, they are illegal. However, if they are usual LED light strips for the illumination inside the vehicle, they are not illegal.

Wondering why the flashing and the strobing ones are illegal?

I will cover that below.

Why are LEDs on cars illegal?

Usually, when you install LEDs inside the car, they will illuminate the interiors and propagate outwards.

At the centerline, they might not make much of a difference.

When it comes to the periphery of the overall field of view, they can certainly reduce your ability to monitor over a wide angle.

Not only that, since they propagate outwards, they can disturb other drivers as well.

This is for LEDs that are consistently turned on. However, they aren’t illegal.

Imagine when the LEDs turn on and off multiple times within a minute. That can undoubtedly irritate anyone and also block their field of view.

When the drivers are disturbed or distracted, it can certainly lead to accidents. To avoid this, strobing and flashing LED interior lights are illegal.

You might think that interior led lights in a car can disturb only other drivers.

It can disturb as well as impact your driving skills as well.

When the lights are flashing fast, they can reflect from the windshield. We are speaking about the reflection which happens towards the interiors rather than the exteriors.

When that happens, chances are you might not be able to view the road or the other cars for a few seconds. These few seconds are more than enough to cause an accident when driving at high speed.

Not only that, the flashing and the strobing can reflect from other vehicles as well. In that case, when you try to spot a vehicle, you will see a flash of light and will be blinded by it. Once again, this can cause accidents.

It is another reason why flashing and strobing interior LED lights are illegal.

Even when you can spot a vehicle at a distance and can see along the entire field of view, there is a risk from interior LED car lights.

They can easily distract you. When you’re distracted, the chances of an accident occurring are pretty high.

The road authorities try everything they can to remove such distractions. If they allow you to put such a distraction inside your car, the number of road accidents will surely shoot up.

What States Is It Illegal to drive with interior lights on?

If you look at the Road safety codes and ethics of most states in the US, you won’t explicitly find any state stating that driving with interior lights on is illegal. However, if you repeat this behavior repeatedly, chances are some of the other cops will always issue you a ticket for the same.

While there is a pretty thin difference between these instances, you can get a ticket due to having the interior lights on.

I will now let you know more about state-specific laws in circumstances where you can or cannot get a ticket in a particular state.

California does not have any law in which it is illegal to drive with your interior lights on. However, it is deemed unsafe, and therefore the patrolling cop can indeed take a call as to whether they will issue you a ticket or not. A lot depends on your behavior inside the car. If you are eating something or texting simultaneously, you can indeed get a ticket.

The laws in Florida are almost the same as in California. It isn’t illegal to drive with interior lights on. However, once again, it is deemed to be unsafe. Especially when you have kids in the car, it might be frowned upon or even get your ticket.

New York doesn’t have a law that states that driving around with your interior lights on is illegal. However, the police might still pull you over.

This usually happens when there is a lot of glare in the lights inside your car. In that case, it will disturb other drivers, and therefore the police might pull you over. On pulling over, they might just instruct you to turn off the lights or might ask the reason for the same.

In some cases, the cops might give you a ticket for unsafe driving as well.

Road safety rules in Ohio clearly state that if something is a safety hazard for the driver of the car himself or other drivers, the driver can be issued a ticket for the same. In this state, driving with your interior lights on is considered a safety hazard. That is why; you’re more likely to get a ticket in Ohio if you have interior LED car lights on.

In almost every state in the United States, the laws are the same. If you just look at the black and white letter of the law, you will seldom find a state stating that driving with your interior lights on is illegal.

However, patrol cops are instructed to give your ticket if you hamper the safety of your vehicle or other drivers. That is why, if the patrolling cop is pretty strict, you can get a ticket even when you’re driving with interior lights on.

According to Texas Transportation Code Sec 547.305, you are not able to operate a vehicle with a red, white, or blue beacon, flashing, or alternating light unless it is authorized by the law.

According to Sec. 12-215.1, it is illegal to run a vehicle with red and blue LEDs with rotating, oscillating, and flashing lights.

According to 2021 Minnesota Statutes 169.64, no red or any colored lights with flashing lights are permitted except those that are being authorized by public safety.

Is It Illegal In Canada?

There is no exceptional rule that prohibits this in Canada however according to Sec 195 (1), you can’t move a vehicle unless the view of a driver is obstructed to the sides or front. Moreover, you can’t drive without due care and attention.

Is it illegal to have colored lights inside your car?

If the sole aim of using cultured lights inside your car is to mimic a patrol car, it is illegal to do so.

In most of the states, you can have colored lights inside your car as long as they are not blue or red. If you are specifically speaking about California, the only restriction is that you cannot have red interior lights in your car.

RGB lights inside the car are generally considered to be illegal. This is especially true for red and blue light.

If you’re speaking about underglow lights, they are legal but only when they remain covered. Also, the programming of the blue lights should be such that they should not light up on public roads. Similar to the interior lights, red and blue colors are not allowed in the underglow lights. Flashing and strobing are not allowed as well.

Generally, you can assume that anything that can interfere with your car’s safety or that of others isn’t allowed by law.

There is a grey area left to the interpretation of the patrolling officer in the case of interior lights. However, if you do not want to worry about a ticket, it is a good idea to stay away from flashing, bright, or strobing interior lights. Also, you shouldn’t drive with interior lights on as far as possible.

What if I put led lights inside my car?

1. Use them only during special instances:

You should program these lights in such a way that they only illuminate during braking or during taking a turn. That way, they won’t remain illuminated for long, and therefore the chances of you receiving a ticket are pretty low.

2. No strobing or flashing:

You shouldn’t use LED lights which strobe or Flash. That can be considered a distraction, and therefore you can get a ticket for the same.

3. Do not use the lights which cops use:

Never use the interior lights which cops use inside or outside their car. That can be considered an attempt to mimic the car of the cop, which can earn you a ticket.

4. Do not turn the interior lights on and drive:

As far as possible, do not turn on the interior lights and drive. Only in special circumstances when it is essential to do so you can do that. Otherwise, you have to stay away from committing this mistake.

Firstly, strobing and flashing interior LED car lights can be considered a safety hazard and therefore can earn you a ticket. Other than that, such lights will not cause you a problem unless you are consistently driving with the interior lights on.