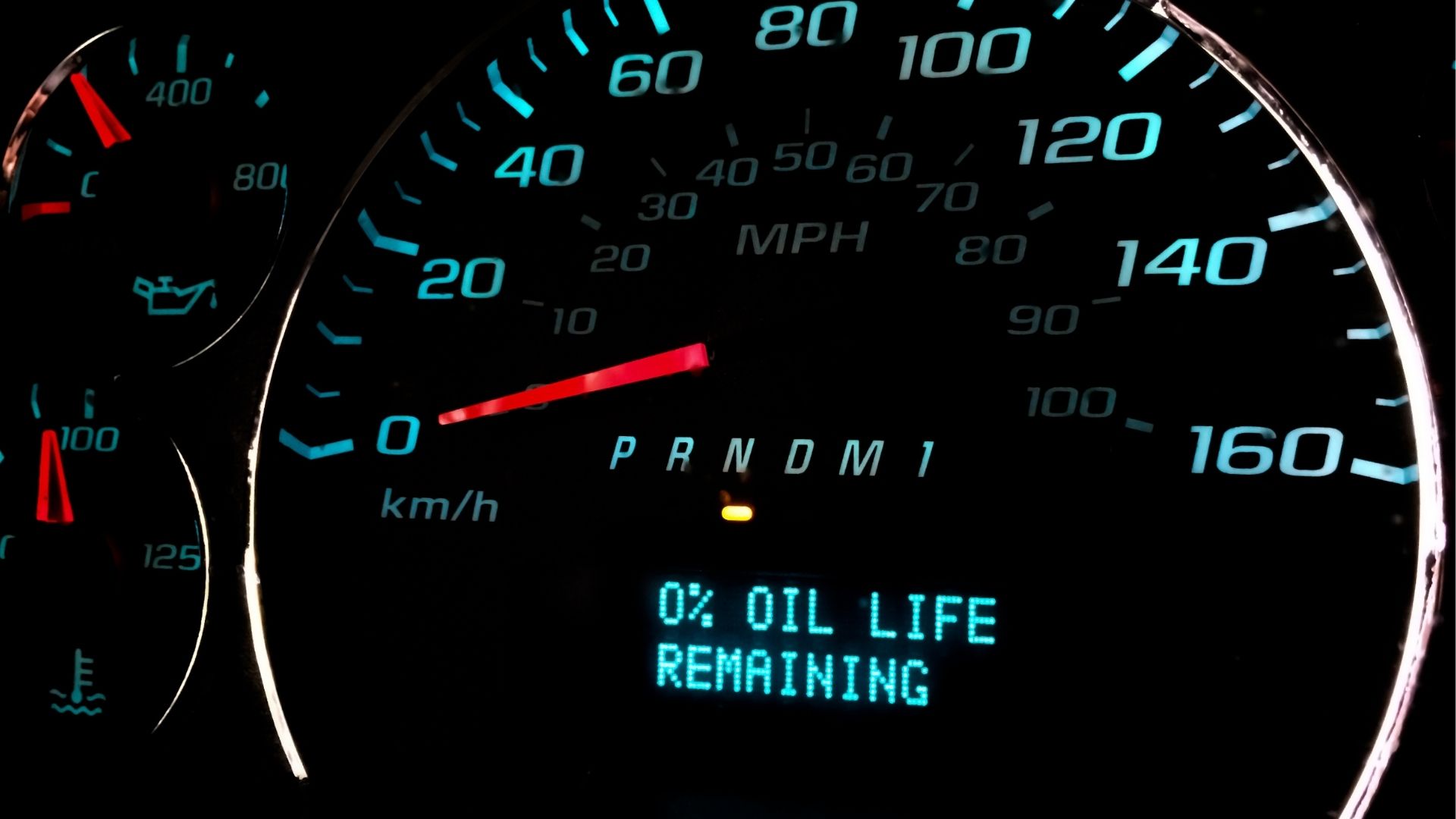 Driving your car on 0% oil life sounds like it would be a catastrophic mechanical disaster that would surely lead to a blaze of smoke and flames, to which we’d say you’d be mostly right.

What does 0% oil life mean?

A 0% oil life warning means that your oil has fully exceeded its lifespan and no longer provides the lubricating effects that ensure optimal engine performance and safety. It is essentially a percentile indication that your oil is now fully degraded.

Most modern cars have several sensors and mechanisms that monitor the oil life of a car and send a number of complex algorithms through a computer that calculates how long until your engine oil has been completely used up as a percentage.

A 100%-oil life would mean that your car has recently had its oil changed and the oil is working at its peak lubricating capacity. After driving around for a few thousand miles, depending on the make and model of the car (more on that to come) you’ll slowly start to notice your oil life degrading, which is exactly what’s meant to be happening.

Can you drive with 0% oil life?

Yes, you can drive your car with 0% oil life in the most technical sense however you should avoid doing so as much as possible. Depending on your car, you’ll be able to achieve roughly 500-1000 miles on 0 oil life and likely not see the damage.

Having reserves ensures that if you find yourself on 0%-oil life you won’t be subjected to a hefty repair bill soon after. Carmakers generally ensure that you have at least 500 miles of oil life remaining after you’ve been told there’s nothing left.

However, if you’re in the middle of the road and notice that you’ve dipped down to 0% engine life, don’t panic, just take your car to your nearest trusted mechanic and have an engine oil change done. It’s a quick and decently affordable process, and depending on your car, you may even be able to save some money and do it yourself.

How Dangerous is Driving on 0%-Oil Life?

While your car won’t immediately burst into flames the moment you see that you’ve reached 0%-oil life on your dashboard, driving with your car in such condition can cause serious engine problems over time that will result in catastrophic failure and expensive repair bills.

According to Scott Honda of West Chester,  by driving with degraded oil your car’s engine may fail or significant damage may be caused.

It’s recommended that when you notice your car start dropping below 15% oil life, you should schedule an appointment with your local dealership or mechanic to offer servicing that will easily prevent major engine issues from arising.

You may be wondering at what percentage should you start worrying about your oil life and have to change it. Now, this still depends on the car you’re driving and your driving habits, but the recommendation as a general rule is once your oil life starts running below 15% you should take your car in for an oil change.

From 5% and below you should really be prioritizing taking your car for an oil change.

Is it safe to drive a car with a 0%-oil life remaining?

It’s not entirely safe to drive with degraded oil as you run the risk of causing irreversible damage to your engine, however, it’s unlikely that an injury or risk of death would occur to you as a driver while driving your car.

0%-oil life warning is really just an indicator reminding you to go get your oil changed as soon as you can.

You can drive for quite some time before you realistically will experience any majorly adverse effects of driving in such a condition.

Although, it is worth noting that the likelihood of damage occurring is very heavily dependent on the conditions of the rest of the car and the environment around you.

For example, if you live in a cold environment, the oil company Mobil warns that the weather has the potential to thicken your motor oil and cause a misreading with your oil life meter.

Thickened oil moves slowly throughout your engine and can cause parts of the engine to operate dry leading to damage.

In which case, make sure you buy weather-appropriate winter engine oil to avoid misreading and engine damage.

A hot environment is not as likely to affect your engine oil so long as it isn’t wintering oil and you have sufficient coolant.

More importantly than the weather, however, the car you drive will always translate 0%-oil life very differently to the next car.

This has to do with how manufacturers make their cars and the age of the sensors and components in your car.

Don’t be alarmed when you see the message, simply use it as a guide to ensure your car runs at its optimal performance.

What happens when your oil life is at 0%?

When driving at 0%-oil life your car runs the risk of creating oil base sludge in your engine compartment that has no lubricating effects and causes your engine’s parts to grind up against each other until severe wear and tear leads to any number of catastrophic failures that would result in a need for a completely new engine.

Engine oil is the lubricant that keeps the multitude of moving parts in your engine grinding up against each other smoothly and without damage. The less oil you have, the less lubricated your engine parts are, and the more likely they are to be damaged from rough friction.

To understand, stretch your arm out and rub the inside of your forearm as hard and fast as you can with your other hand; it’s going to hurt after a while, and if you do it long enough, you’ll probably damage your skin. Now try this again with lotion or Vaseline on your forearm and it’s going to feel smooth and silky, all the way until the lotion starts to dry up and you start hurting yourself again.

The same principles apply to engine oil, engine parts will move along smoothly with sufficient oil lubrication, but as soon as the oil starts to dry up then the parts will start causing damage to each other. The lifespan of the oil lubricating the parts is known as the ‘oil life’ of the car.

Capitol Toyota notes that driving on 0%-oil life is extremely damaging regardless as degraded oil mixes with contaminants in the air such as dirt and grime creating a sludge that can wreak havoc on your engine. It will start as decreased performance and gradually degrade until something essential completely seizes and the engine simply stops working.

However, this won’t happen immediately after driving at 0%-oil life, it will happen over time. The collection of oil sludge in the engine to the point of engine failure takes considerable neglect or harsh conditions to create.

You really shouldn’t be driving on 0%-oil life as it’ll have its own capacity to cause expensive damage, generally aim for replacing around 5%, and avoid repeatedly dipping below 5% oil life.

According to driver experiences, most cars will range from 500-1000 miles on 0%-oil life without lasting damage. Allowing drivers plenty of miles to get to a dealership and fix their car.

Referring back to the skin and lotion allegory used earlier, letting your dry parts grind up on each other is just asking for something to get badly damaged sooner or later. Dropping your oil life to 0% means your engine is no longer sufficiently lubricated and you’re greatly increasing the likelihood of permanent damage to the engine with every mile you go, or at least that’s what dealers and mechanics will tell you.

They’re far from wrong, but they’re definitely trying to instill a sense of fear to get your wallet split open as soon as possible. In reality, car companies always leave room for carelessness on the part of the car owner.

What should I do if I’m in the middle of the road with 0% engine life?

Simply start your car and drive to the nearest mechanic or schedule an appointment as soon as possible.

As previously stated, your car is designed to drive tremendous distances of over 500 miles on 0%-oil life because the oil life indicator is simply a reminder system to keep the car in tip-top shape.

In reality, cars are built to continue on degraded oil for quite some time. Don’t find yourself overdoing or forgetting to take care of your car or else you’ll find yourself getting fairly comfortable until something burns and knocks on the engine.

From well before you even had a car, you likely heard plenty of second-hand car advice that you need to regularly change the oil on your car at its set service intervals to make sure your car runs smoothly and efficiently, which is true. It’s really important to ensure your car is always well lubricated, but your car won’t punish you severely for being late for maintenance.

What does 0%-oil life mean for different brands?

As a general consensus from almost all makes and models, driving beyond your oil’s lifespan won’t cause it to spontaneously combust, but it will cause some form of long-term damage that you should be ready to look out for if you let your car get to zero regularly.

Having said that, now that you’ve finished reading you start your engine and drive off to your mechanic knowing you’ll be fine for at least the next few hundred miles.